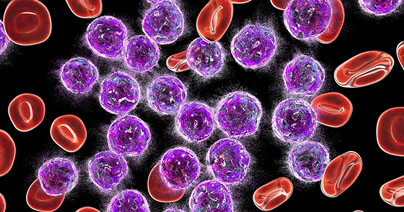 Resistance to anti-cancer treatments is a significant therapeutic challenge and is typically associated with mutations in signaling pathways that are involved in cell proliferation, survival, and tumorigenesis. Genomic analyses of relapsed pediatric acute myeloid leukemia (AML) patients have identified mutations, deletions, and changes in promoter methylation associated with Wnt-β-catenin signaling[1],[2]. Mutations in the PI3K-Akt pathway are also frequently associated with treatment resistance in AML and many other cancers[3],[4]. Hematopoietic stem cells are particularly sensitive to mutations in these signaling pathways and numerous studies have shown that targeting each of these pathways separately is associated with poor efficacy and emergence of resistance[5]. AML resistance not only emerges from chemotherapy but can also be seen in response to immunotherapy[6].

END_OF_DOCUMENT_TOKEN_TO_BE_REPLACED 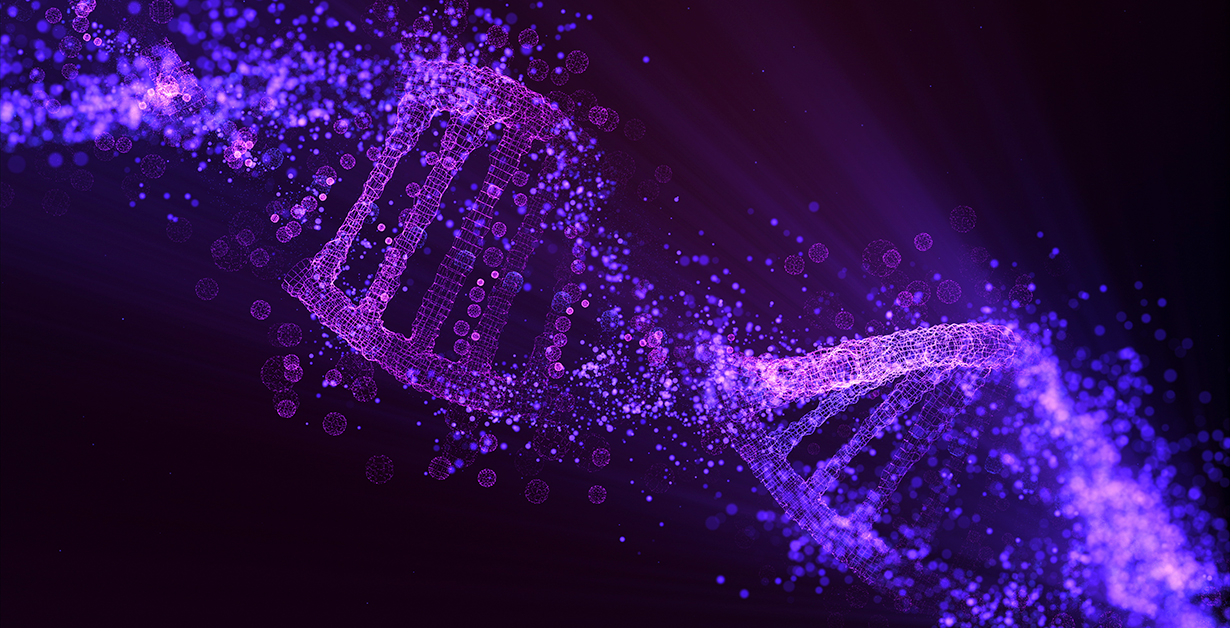 Next Generation Sequencing: Revolutionizing Oncology Research One Base-Pair at a Time

Advances in oncology research have led to the development of personalized treatments based on specific knowledge of a patient’s tumor. New therapies have been customized to target signaling pathways that are hyperactivated or block specific variants of cell surface molecules, thus leading to better anti-tumor responses. Next generation sequencing (NGS) technology has been at the forefront of these breakthroughs by enabling researchers to rapidly sequence RNA transcripts (RNA-seq) or exons (whole exome sequencing; WES) within tumor tissue and translate these findings into novel therapies.

END_OF_DOCUMENT_TOKEN_TO_BE_REPLACED 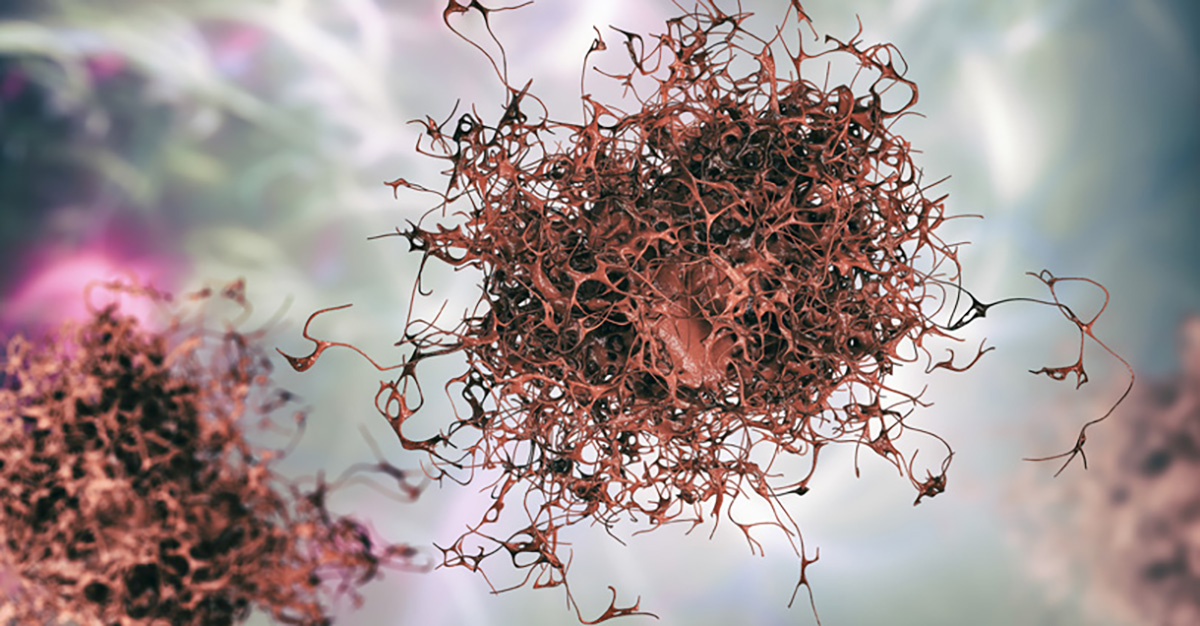 Melanoma broadly defines cancers that originate in melanocytes in the skin, eye, and inner ear. Cutaneous malignant melanoma is one of the most aggressive and fatal forms of this disease, but advances in immuno-oncology have dramatically improved outcomes1.  Advances in cancer genomics have been critical to evaluating which mutations are involved in a shift toward metastasis and have been valuable to informing treatment options using novel inhibitors that target specific gene mutations. Here we highlight mutations that are critical to tumor formation and metastasis and feature immuno-oncology treatments that are in use or being evaluated as individual or combination treatments.

END_OF_DOCUMENT_TOKEN_TO_BE_REPLACED 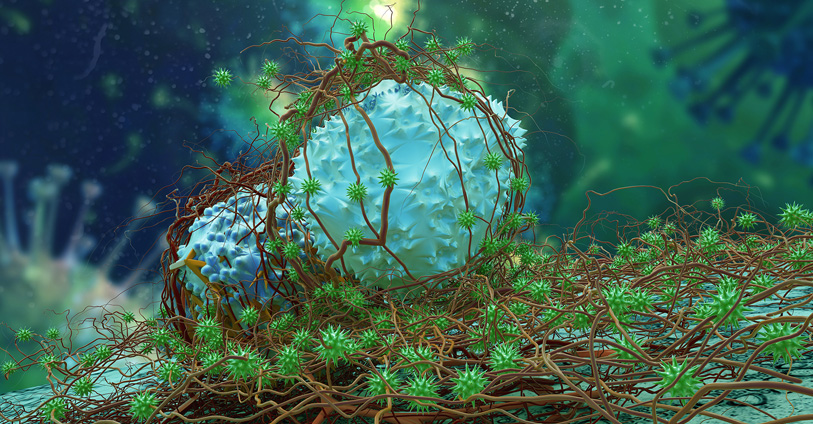 Renal cell carcinoma (RCC) is a common cancer of the genitourinary tract that has very poor survival outcomes if metastatic. RCC is now understood to be composed of several different types of cancer with different genetic features and varied clinical responses. Histological diagnosis has been the primary method to diagnose RCC and has been used to define three major RCC subtypes, including the most common subtype, clear cell renal cell carcinoma (ccRCC), papillary renal cell carcinoma (PRCC; further divided into two subtypes), and chromophobe renal cell carcinoma (ChRCC)[1]. More recent comparative genomic and phenotypic analysis has identified mutations and epigenetic modifications associated with different histological subtypes[2]. Across all subtypes, increased DNA hypermethylation and gene alterations in CDKN2A were associated with a poor prognosis as was an increased Th2 immune gene signature. For ccRCC, increased levels of mRNA transcripts associated with ribose metabolism and the immune response were associated with poor survival. ccRCC is also defined by the early loss of chromosome 3p, which in turn causes a loss of heterozygosity for the VHL, PBRM1, SETD2, and BAP1 tumor suppressor genes and subsequent mutation of these genes that leads to tumorigenesis[3]. There is also a subset of ChRCC with a unique metabolic expression pattern that is associated with extremely poor survival2. PRCC can be classified as type 1, for which PBRM1 mutations are linked to poor survival but type 2 PRCC has increased expression of glycolysis and metabolism related mRNA transcripts2.

END_OF_DOCUMENT_TOKEN_TO_BE_REPLACED

Somatic mutations in the additional sex comb-like 1 (ASXL1) gene have been identified in multiple hematologic malignancies, including acute myeloid leukemia (AML), and are associated with poor prognoses1. ASXL1 encodes a nuclear protein that regulates epigenetic remodeling and transcription through interactions with polycomb complex proteins and transcriptional activators and repressors. Several ASXL1 mutations have been associated with loss of protein expression that leads to myeloid transformation2. In contrast, gain-of-function mutations in ASXL1 result in expression of a truncated ASXL1 protein that can bind to BRCA-1 associated protein 1 (BAP1) and cause leukemogenesis3,4. Targeted reduction of BAP1 activity is sufficient to prevent this malignancy process5.

END_OF_DOCUMENT_TOKEN_TO_BE_REPLACED Biliary tract cancers, which are also known as cholangiocarcinomas (CCA), describe malignancies that occur in the biliary tract and include the pancreas, gallbladder and bile ducts. These are relatively rare cancers but are associated with a poor prognosis given that these cancers are difficult to detect and are usually diagnosed at later stages of disease. Histologically, CCAs are predominantly adenocarcinomas and are classified by growth patterns (mass forming, intraductal, or periductal) and anatomical locations (intrahepatic, perihilar, or distal), and mixed hepatocellular CCAs are defined as a separate subtype of primary hepatic cancer1.

END_OF_DOCUMENT_TOKEN_TO_BE_REPLACED 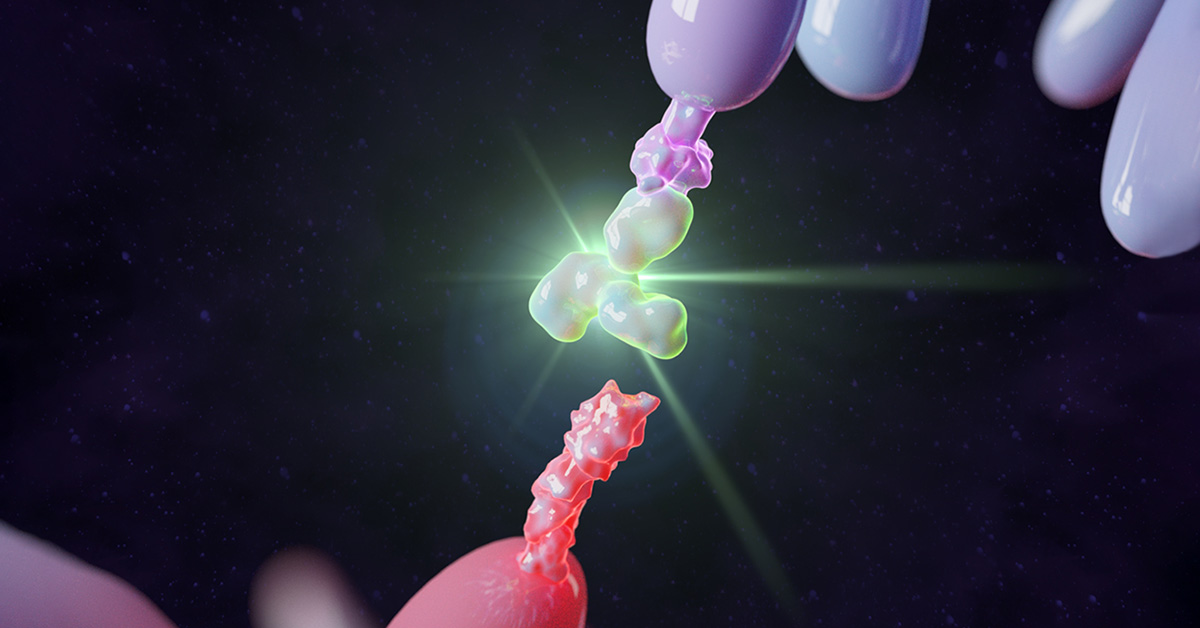 Acute myeloid leukemia (AML) is an aggressive hematological malignancy that has been treated in the same way for the last several decades and typically includes standard chemotherapy protocols as well as bone marrow (BM) transplantation.  Despite advances in the field of immunotherapy, AML has been challenging to treat with immune checkpoint inhibitors that target Programmed Death (PD) - 1/PD-Ligand (L) 1 inhibitors.

END_OF_DOCUMENT_TOKEN_TO_BE_REPLACED 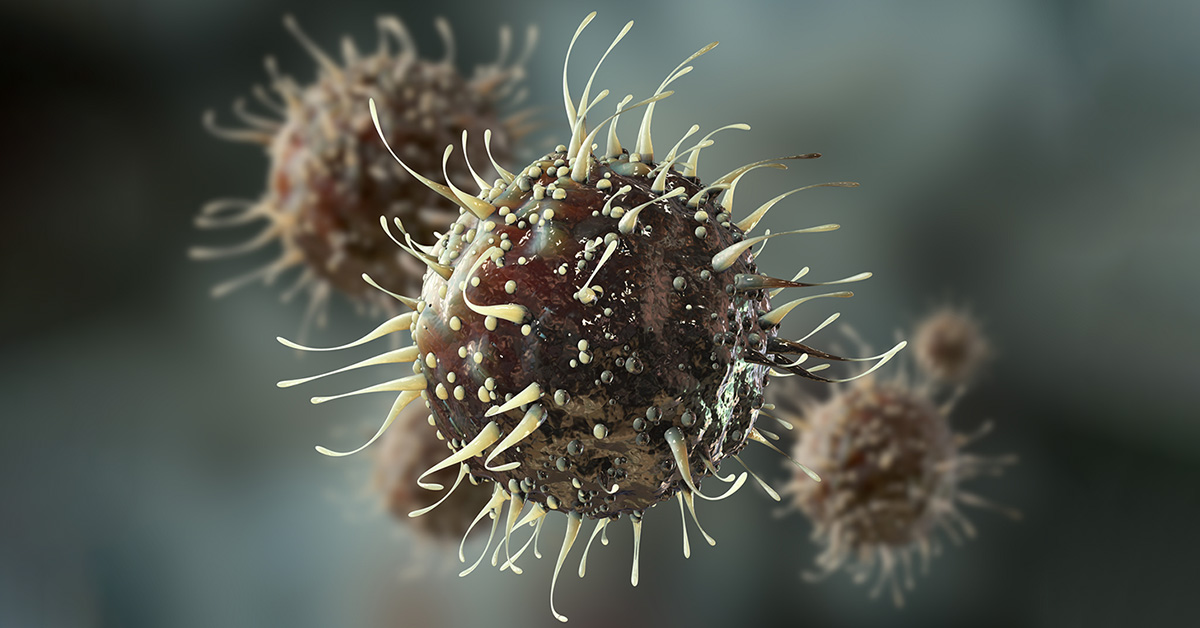 We typically consider viruses as infectious agents or vaccine vectors, which are non-replicating entities that express vaccine antigens. More recently, researchers have been working to develop oncolytic viruses, which are viruses that are engineered to specifically infect and replicate in tumor cells. This targeted infection results in tumor cell lysis and activation of anti-tumor immune responses as well as the release of new oncolytic virus particles that can infect other tumor cells. The concept of oncolytic viruses emerged in the early 20th century when scientists observed that a leukemia patient spontaneously went into remission for a brief time following influenza virus infection. Early attempts to develop non-specific oncolytic viruses were plagued with complications related to poor efficacy and safety issues. As our understanding of targeted immunotherapy for the treatment of tumors has evolved, oncolytic viruses are gaining traction again and an oncolytic herpesvirus (T-VEC or talimogene laherparepvec) engineered to target metastatic melanoma was approved for clinical use by the FDA in 2015.

END_OF_DOCUMENT_TOKEN_TO_BE_REPLACED

Colorectal Cancer and the Benefits of Immuno-Oncology

Colorectal cancer (CRC) is a leading cause of cancer deaths globally. Advances in early detection have improved survival rates, but patients diagnosed with metastatic CRC still have stubbornly poor 5-year survival rates. Standard treatments for CRC include surgery, chemotherapy, and radiotherapy, but alternative immuno-oncology therapies are showing promising results in CRC patients. Here we highlight advances in immuno-oncology therapies that are being used to treat CRC patients or are being pursued in preclinical and clinical studies.

END_OF_DOCUMENT_TOKEN_TO_BE_REPLACED 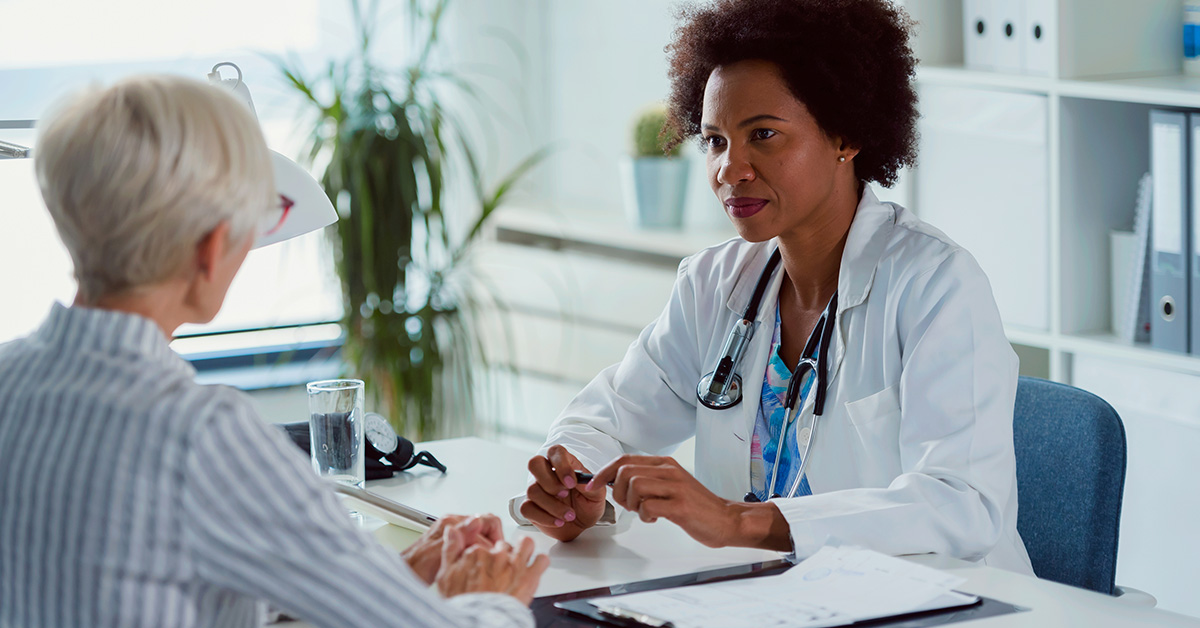 The management and treatment of patients with chronic lymphocytic leukemia (CLL) has improved greatly in recent years due to new insights in genetic and molecular factors that contribute to disease progression. Clinical staging systems were first developed more than 40 years ago and include the Rai system[1], which is based on the presence of lymphocytosis (at least 5,000 mm3 monoclonal lymphocytes), enlargement of lymph nodes, spleen or liver, and changes in red blood cells and platelets. The Binet staging system is an alternative method based on the number of affect lymphoid tissue groups and the occurrence of thrombocytopenia and anemia. The Rai system is more common used in the United States, whereas the Binet system is used more frequently in Europe[2].

Champions Oncology has been attentively monitoring the impact of the novel Coronavirus (Covid-19) on our daily internal operations.  Our priority is the well-being of our employees and the animals in our care, while also ensuring everyone stays healthy.  Champions Oncology is working to manage the potential impact of the situation on our business and also ensure continuity to our customers externally.  Our Executive Leadership Team is meeting frequently to evaluate the global circumstances and provide information and resources needed to manage the situation within our company as effectively as possible.  Here are some actions that we are taking now to mitigate the effects on our business and in turn, to you our customers: