Hackensack, NJ – November 29, 2016 – Champions Oncology, Inc. (Nasdaq : CSBR) engaged in the development of advanced technology solutions and services to personalize the development and use of oncology drugs, today announced its financial results for the second quarter ended October  31, 2016.

Joel Ackerman, CEO of Champions, commented, “This was truly a milestone quarter for Champions.  We have been focused over the last 2 years on achieving profitability while continuing to invest in expanding our technology and products.  We reached this important step in the Company’s evolution by growing our customer base, delivering high quality studies and managing our costs.  With 50% revenue growth and a lower cost base than last year, we have delivered on this ambitious objective ahead of schedule.  Looking forward, we remain confident we will achieve our projected revenue of $16 - 18 million for our fiscal year ending April 2017.  This quarter’s profitability was achieved without any one-time revenue items or non-recurring events while continuing to invest approximately $4 million per year in innovative research and development.  We are now poised to shift our attention to the next phase of strategic growth.”

Dr. Ronnie Morris, the company’s President added, “We have spent considerable time with the Board of Directors developing the next phase of our strategic plan.  We have concluded that now is the right time to shift the emphasis of the company’s strategic efforts towards innovation.  We are committed to increasing our profitability and improving cash flow while simultaneously pursuing an accelerated growth path driven by new uses of PDX and related product offerings.  We have built a customer base of almost 150 pharmaceutical and biotech companies that work with Champions because of our powerful platform and operational excellence.  Many customers have talked to us about expanding our technology and platform to provide them with enhanced products and services based on our current offering.  We are now ramping up our efforts to develop these innovations and meet our customers’ demands.”

To align the Company’s senior management resources with this increased focus on innovation, the Company is announcing a re-alignment of certain roles at Champions.  Dr. Philip Breitfeld, a recent addition to the company’s board of directors, will assume the position of Chief Strategic and Innovation Officer of the Company.  Dr. Breitfeld, a medical oncologist, has over 30 years of experience in oncology research and drug development.  He has held positions as Senior Medical Director and Head of the Global Clinical Oncology Development Unit in the U.S. for Merck KGaA and as Associate Chief Medical Officer at Biocryst.   Most recently he was Global Vice President at Quintiles' responsible for the Therapeutic Centers of Excellence, where his focus was business development and innovation. This change is anticipated to occur during December 2016.

In addition, Joel Ackerman, current CEO, will shift his role to Chairman of the Board of Directors.  Dr. Ronnie Morris, current President of Champions, will assume the role of CEO.  Dr. David Sidransky, the founder of Champions and current Chairman of the Board of Directors, will assume the role of lead director.   These changes will take effect in January 2017.  Dr. David Sidransky commented, “Now that we have proven the business model, we wanted to align the senior team with the new strategic emphasis of the company.  As President of Champions for the last six years, Ronnie is intimately familiar with every aspect of the company’s business. We have developed a plan that ensures a smooth and gradual transition to the new strategic phase.  We look forward to Joel’s continued involvement in the oversight of the company’s financial and operational performance.  I look forward to working closely with Ronnie, Phil and the rest of the team on the next phase of growth.”

Net cash used in operations was $2.6 and $5.1 million for the six months ended October 31, 2016 and 2015, respectively, a decrease of $2.5M or (49.4%). The reduction in cash burn is the result of revenue growth, aggressive expense management and payments received in advance of revenue recognition.

Net cash used in operations for the second quarter of fiscal 2017 was $117,000.  The company ended the quarter with $4.3 million of cash and cash equivalents on the balance sheet.

Translational Oncology Services (TOS) revenue was $4.0 million and $2.5 million for the three months ended October 31, 2016 and 2015, respectively, an increase of $1.5 million or 59.4%. The increase is due to increased bookings in prior quarters, both in the number and size of the studies, and the addition of new customers.

Full details of the Company’s financial results will be available Wednesday December 14, 2016 in the Company’s Form 10-Q at www.championsoncology.com. 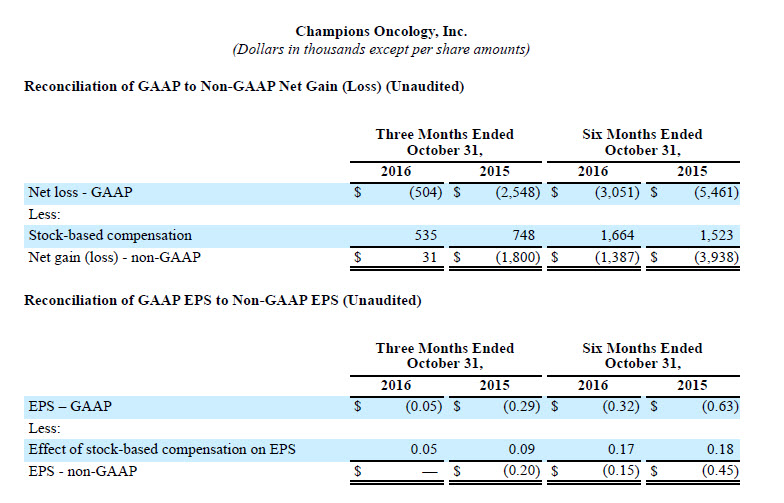 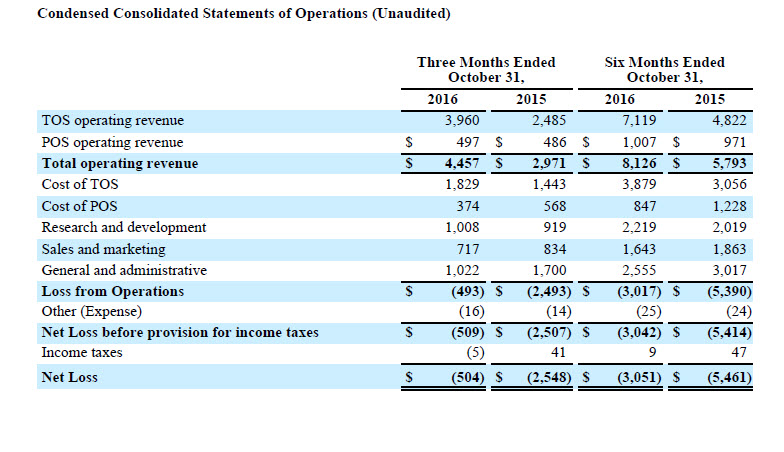