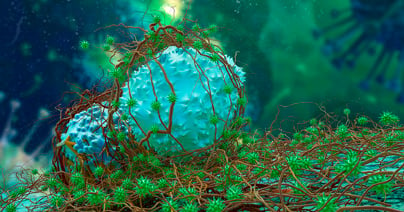 Renal cell carcinoma (RCC) is a common cancer of the genitourinary tract that has very poor survival outcomes if metastatic. RCC is now understood to be composed of several different types of cancer with different genetic features and varied clinical responses. Histological diagnosis has been the primary method to diagnose RCC and has been used to define three major RCC subtypes, including the most common subtype, clear cell renal cell carcinoma (ccRCC), papillary renal cell carcinoma (PRCC; further divided into two subtypes), and chromophobe renal cell carcinoma (ChRCC)[1]. More recent comparative genomic and phenotypic analysis has identified mutations and epigenetic modifications associated with different histological subtypes[2]. Across all subtypes, increased DNA hypermethylation and gene alterations in CDKN2A were associated with a poor prognosis as was an increased Th2 immune gene signature. For ccRCC, increased levels of mRNA transcripts associated with ribose metabolism and the immune response were associated with poor survival. ccRCC is also defined by the early loss of chromosome 3p, which in turn causes a loss of heterozygosity for the VHL, PBRM1, SETD2, and BAP1 tumor suppressor genes and subsequent mutation of these genes that leads to tumorigenesis[3]. PRCC can be classified as type 1, for which PBRM1 mutations are linked to poor survival but type 2 PRCC has increased expression of glycolysis and metabolism related mRNA transcripts[2]. The tumor microenvironment plays a critical role in ccRCC progression as well. A recent study showed that metastatic tumors were enriched with terminally exhausted CD8+ T cells and suppressive macrophages, and elevated markers of immune dysfunction correlated with a worse prognosis[4].

CcRCC tumors with VHL mutations show overexpression of vascular endothelial growth factor (VEGF) and hypoxia-inducible factors (HIFs), which can contribute to angiogenesis and cancer progression. Similarly, some RCC show hyperactivation of the serine/threonine kinase mammalian target of rapamycin (mTOR), which can lead to overproduction of VEGF. VEGFR inhibitors and anti-VEGF antibodies have been tested as therapies for RCC, and the anti-VEGF antibody bevacizumab has been approved for use in combination with IFN-α for metastatic RCC[5]. The mTOR inhibitors everolimus and temsirolimus have also been approved for the treatment of RCC, typically in combination with tyrosine kinase inhibitors (TKIs)[6]. Combination therapies that target VEGF and mTOR are considered more effective since they work in concert to target tumor growth and vascularization, whereas sequential treatments are typically associated with a greater likelihood of tumors developing resistance[7]. Unfortunately, these combination therapies are associated with undesirable toxicities and have not been linked with durable responses[8].

Advances in immunotherapy have led to transformative treatment options for RCC. Immune checkpoint blockade (ICB) has been one promising treatment strategy, and the FDA approved the use of anti-PD-1/PD-L1 (nivolumab) for the treatment of advanced ccRCC in 2015[9]. A follow up study showed that anti-PD-1 was associated with the best clinical benefit in ccRCC carrying loss-of-function mutations in PBRM1, which appears to affect tumor expression profiles in such a way to maintain responsiveness to checkpoint blockade[10]. In addition, recent studies have shown that anti-PD-1 responders have ccRCC tumors with high T cell and low myeloid cell infiltration, as well as high B cell abundance[11],[12], and a 2021 report found that anti-PD-1 (nivolumab) treatment promotes expansion and maintenance of cytotoxic CD8+ T cells. Cytotoxic T-lymphocyte-associated protein 4 (CTLA-4) is another checkpoint molecule that has been targeted for checkpoint blockade with the monoclonal antibody ipilimumab. Similar to PD-L1 blockade, CTLA-4 blockade was associated with a partial response against metastatic RCC. Combination therapies have shown much more durable responses in patients with advanced RCC, and the FDA approved the use of nivolumab plus ipilimumab for the treatment of intermediate or high risk metastatic RCC in 2018[13]. ICB blockade in combination with TKI are also under investigation as alternative first or second line treatments. A recent study has shown that the anti-PD-1 monoclonal antibody nivolimumab combined with the tyrosine kinase inhibitor cabozantinib is associated with significantly higher progression-free survival and overall survival in previously untreated advanced RCC patients compared with the tyrosine kinase inhibitor sunitinib, a currently approved first-line treatment option[14]. Sadly, PD-1/PD-L1 blockade has been less successful for PRCC[15] and ChRCC[16], and further studies are needed to identify therapeutic targets in these forms of RCC.

The future of RCC therapies relies on the identification of new molecules or pathways in tumor cells that can be targeted therapeutically without causing toxicity or promoting resistance. Advances in single-cell omics are leading the way in terms of target identification and understanding how different forms of RCC progress.