Glioblastoma multiforme (GBM) is an aggressive form of primary malignancy of the central nervous system (CNS) that causes brain tumors. GBM has been associated with poor prognoses and high mortality rates and a 5-year relative survival rate ranging from 6-22% percent depending on age of onset[1]. Currently, standard-of-care treatments include cytoreductive surgery followed by chemoradiotherapy, but these are not considered curative treatments, and efficacy varies widely between patients[2]. Temozolomide is a DNA alkylating agent prodrug commonly used for adjuvant chemotherapy in GBM, but treatment resistance is a common occurrence, and this drug is also associated with clinically significantly toxicity[3].

Many preclinical studies and clinical trials have sought to identify targeted therapies that can penetrate the blood-brain barrier and treat GBM. Unfortunately, GBM is a genomically heterogeneous disease and is not characterized by commonly occurring mutations in discrete genes. Attempts at targeted therapies have failed thus far during clinical trials and have included drugs that target the EGFR, PI3K, SRC, and mTOR signaling pathways[4],[5],[6],[7]. Dozens of clinical trials are in progress that target these pathways and may yet identify new therapeutic options that treat GBM[8],. 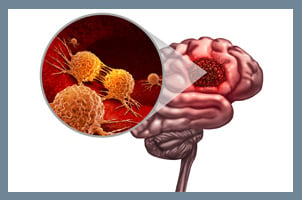 Single cell sequencing studies have revealed that GBM carry a wide range of mutations that drive oncogenesis, and mutations typically target common metabolic pathways[9][9]. These divergent drivers of GBM have made radiotherapy an appropriate treatment modality, but resistance occurs frequently and has been linked to intratumoral accumulation of purine metabolites, particularly guanylates. Preclinical studies have indicated that GTP synthesis inhibitors can reverse radiotherapy resistance[10].

Dysregulation in the Wnt signaling pathway has also been observed in GBM[11], and this has been a pivotal finding as Wnt signaling is critical to the development of neural stem cells (NSCs) and drives differentiation, proliferation, and self-renewal in the CNS[12],. Wnt signaling is thought to contribute to formation of GBM stem cells and has also been linked to autophagy-mediated temozolomide resistance[13], thus making Wnt signaling components attractive candidates for targeted therapies. Various Wnt inhibitors are currently being developed or are under investigation as targeted therapies. Other therapies aimed at targeting GBM stem cells are also being explored, as this strategy may overcome failures observed with treatments targeting EGFR, tyrosine kinases and VEGF/VEGFR.

Advances in our understanding of GBM development coupled with improvements of drug deliver to brain tissue will increase the likelihood of identifying effective therapies for GBM. GBM tumors particularly challenging as they are not enriched for immune cells and cannot be treated successfully with adoptive cell therapy or immune checkpoint blockade approaches. Attention is also being focused on better stratifying GBM patients and using molecular characterization to inform treatment decisions. There is great hope that the future of GBM research will lead to effective therapies and improved survival outcomes.